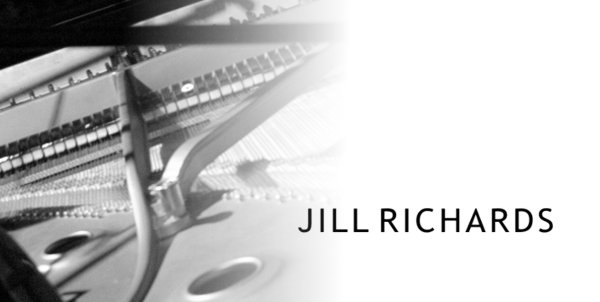 Collaborations, when they work, are a beautiful thing and quite a few of these sublime coming-togethers were part of this year’s National Arts Festival. One of the best, Antjie in Berlin, is a collaboration between artists from different genres who, with a stunning concept, created one of the most blissful and quite unusual moments at the festival.... Richards, who recently collaborated on one of William Kentridge’s huge stage shows, is perfect in her role as she allows the music to guide her performance. - The Star

South Africa’s only experimental concert piano diva Jill Richards sat down at the National Arts Festival in Grahamstown last night and coaxed from her Steinway concert grand a meditation on South Africa as seen from abroad through the eyes of poet and author Antjie Krog. Antjie in Berlin is so delicate and so fierce that all you can really do is remove your glasses, close your eyes, cock your head and open your ears.

Composed by South African-born, Denmark-based Rudiger Meyer, Antjie in Berlin brings to life letters from Germany as read by Krog and written to her mother, extracted from her book Begging to be Black. What Meyer and Richards do is ooze music into the spaces between the words. Their accomplice is sound designer Shaughn Macrae, who bleeds tech and echo into the room. The result is a kind of poetry that we’ve never heard before – with an anarchistic twist of contemporary South African issues. - City Press

Dimitri Vassilakis [of the Ensemble Contemporain] ... shared the score with South African Jill Richards, playing the chosen pages for the first time. In the warm and flattering accoustics of the church, the luminous resonance of Structures Book 2 (1961) ... were unfolded with an intergrity enhanced by the precise and committed playing of its performers. - Anaclase.com

In Jill Richards’s piano recital there was the pleasure of hearing avant-garde classics from Stockhausen and Feldman played with an exquisite touch. - Daily Telegraph

Richards...seems on a one-person mission to break the piano out of constraining perceptions that it is only a concert or recital instrument. - Mail & Guardian

Richards and Joubert... performed with a seriousness of approach, intense concentration and total commitment to the work. Stockhausen's score was handled with aplomb, each poignant nuance and articulation shading executed with careful grading of tone. (They) evidenced pianism of the highest order, testimony to their intense and very thorough preparation. In their hands Stockhausen's musical intent unfolded with understanding and artistic purpose...As a duo these performers have welded into a unified ensemble producing an integrated, cohesive musical response. - Cue

Richards should be commended for her fine performances of these works [Volans Etudes], as well as her confidence in their quality. - Natal Mercury

Richards...is a formidable interpreter with a technique and sensitivity of the highest order. - Die Burger

...there was no doubt that the pianist Jill Richards took the centre stage, notably with her magnificent interpretation of the three [Volans] Etudes. To these pieces, Richards brought rich insight into their highly contrasted and demonically difficult material, paying attention to every nuance with consistent pianistic integrity. - Sunday Independent

Volans and Richards are both very fine performers and played in beautifully balanced ensemble, reflecting considerable virtuosity. - The Mercury

...in Cicada, the tight co-ordination of the pianists [Jill Richards and Mathilda Hornsveld], seemingly guided by a shared inner pulse that projects tension even across moments of inactivity, is especially winning. - International Record Review

...Jill Richards, who has dedicated a big part of her life to the performance of South African music gave us a scintillating pianistic interlude with music by Peter Klatzow, David Kosviner and Pieter Smit. - Cue

[Pickup] was fortunate to be partnered by an artist like Jill Richards, well known for her exceptional musicality, command of colour and insight into a wide variety of styles. - Die Beeld

Richards [and Hornsveld] produced a programme which was well received, a result not only of cunning programming but stunning playing. - Eastern Province Herald

The composer could hardly have hoped for a better equipped, more dedicated exponent of contemporary South African piano music than Jill Richards... Richards' technical and musical mastery of both the finest soloistic detail and the broader structural dimension was near perfect. - Die Beeld [review of world première of Michael Blake piano concerto]

Richards sparkles with near perfection: The composer could hardly have hoped for a better equipped, more dedicated exponent of contemporary of South African piano music than Jill Richards. (Her) technical and musical mastery of both the finest soloistic detail and the broader structural dimension was all but perfect. - Die Beeld [review of world première of Michael Blake piano concerto]

Pianists Jill Richards and Lisa Joubert, with sound engineer Shaughn Macrae, did a brilliant performance of Stockhausen's rarely performed masterwork Mantra. There was unbelievable focus and concentration from the performers. - Sunday Tribune

In addition to the two piano parts which were performed by Richards and Joubert with incredible accuracy (including the interpretation of sound effects with computer-audio modulation, rhythmic values and harmonic interactions), the two also executed the percussive work with flamboyant joyfulness – Die Beeld

Richards and Coetzee’s interpretation of [Beethoven’s] Sonata for piano and cello in D major op.102 was an unforgettable experience. The intense empathy, technical perfection and outstanding rapport between the two musicians, made for an absolute climax. - Die Volksblad